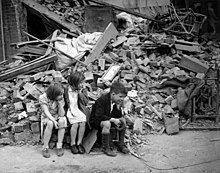 St George’s in the Blitz

Doris Parker, a parishioner from St Mildred’s Church, describes her experiences during World War II.  In particular, she describes her family’s experiences taking shelter at St George’s Church during the war, when the German Luftwaffe bombed London in an attempt to force the British to surrender.  Many people from the Blackheath area took shelter at St George’s while the bombs rained all around.  At the church today we have a credence table and several brass vessels which were given to the church by grateful neighbours who found safety on the lower floor of St George’s during the war.  The stories about St George’s start at 10:50.